After my first full-time year (2017) doing this activity, it was so much fun I decided to continue it for 2018.
During the late Winter and early Spring of 2018, I decided it was time to retire my 44-year old. trusty, reliable and somewhat bent up Radio Shack (Archer) VUF-125 Log-Periodic with sawed off UHF elements. In the early spring, a major vendor of TV/FM/Cable equipment put on sale a long-range, light-weight VHF/FMBC/UHF antenna for an almost too good to be true price.  So, I bought one.


Since its predecessor was for VHF only, I quickly learned after putting it up that the feedline (RG59) needed to be replaced.  The feed-line had been used for cable runs and had been in the attic for probably at least 20 years. The antenna wasn’t picking up UHF channels very well, so a new run of RG6 replaced it. Much better.

For this 2-Year analysis in 2017, I captured 81 FM Broadcast stations during the Spring/Summer Es Season (April 26 – August 16, 8 weeks prior to & after the Summer Solstice).  For the same period in 2018, I captured 108 stations. A little experience, no 2-Meter Es openings and the change in antenna and feed line helped my 2018 results.

Operating practices and procedures:
Purpose of the Analysis:

I remind everyone that I am a Ham first. This is a sideline activity, but something I enjoy doing.  I have been an AM/MW/Shortwave listener for over 55 years, VHF/FMBC/TV DX’er for over 45 years (don’t admit a CB’er too for that long), and a Ham for almost 40 years. I earned VUCC’s (100 Maidenhead Grid Squares) on 6 and 2 Meters in 1988. While in Texas, I worked 43 states on 2-Meters and over 200 Grid Squares terrestrial and all on Single Sideband or CW, plus a North American DX record on Tropo.  On 6 Meters, I worked over 60 DXCC entities and well over 550 Grid Squares.  In my over 35 years DX’ing on 2-Meters, I found that identifying VHF TV stations on Channel 6 and FM Broadcast in many cases led to 2-Meter openings to the same general locations of identified broadcast outlets.

I concur that there are better ways, better devices, and better software to do this. They cost a lot more and I am cheap. I enjoy squeezing blood out of a turnip. I prefer getting a lot out of a little. I found this activity to be fun and effective.

Areas Captured:
The map shows Maidenhead Grid Squares captured during the past 2 years. Several single squares were heard multiple times, especially near metropolitan areas, but was surprised by the large number of smaller towns copied. The plots are to the center point of the grid square heard, not the actual point. 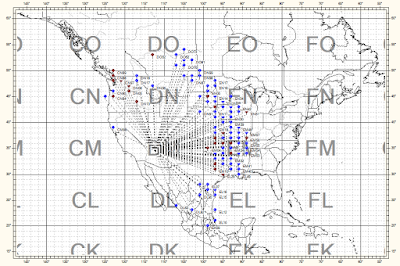 What Frequencies Were Monitored Most:
A surprise on these results. Although the distribution for the 2 years were somewhat different each year, the average and median frequencies were about the same for both years.
The average frequency captured was 95.8 MHz, the median was 93.3 MHz. 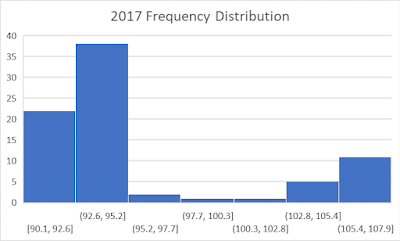 My first year I spent my time watching Es build from the commercial low end of the band where RDS and PiCodes were prevalent. 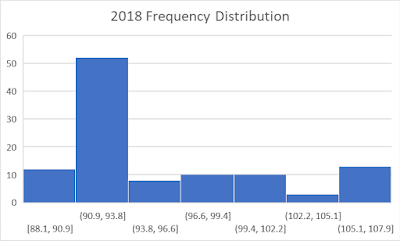 In 2018, I experienced better RDS/PiCodes on the low end. I still focused on low end commercial stations beginning at 92.1 MHz. 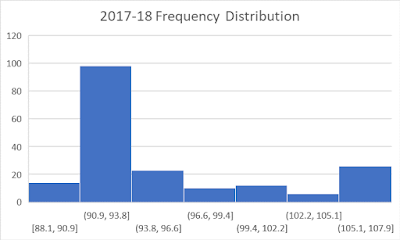 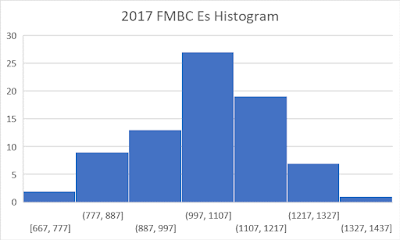 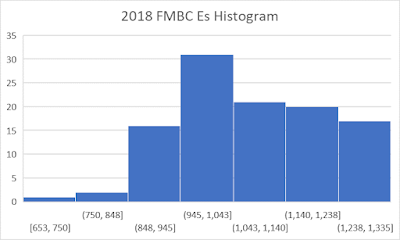 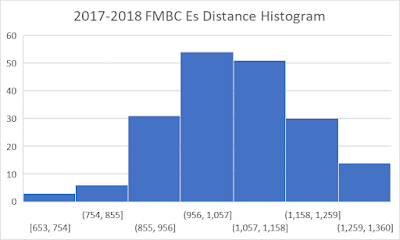 Maximum Useable Frequency
The normal characteristic of Es propagation is that as the patches (clouds) intensify, the result is that higher frequencies reflect. All MUF measurements are based on software developed by Dave Edwards G7RAU and Jim Loop K9SE.

In 2017, there was a smooth decline in captures as MUF increased. This was expected.
I was always looking at the low end of the broadcast band looking for the first indications of Es, then moving up the band as it was evident that it was intensifying.
In 2018, more openings towards Mexico commercial stations with RDS and PiCodes which further allowed me to identify them. Overall, fewer MUF’s above 115 MHz.
For 2 years they measured MUF for all captures was 101.6 MHz (+/- 0.6 for 2 years) and the median 99.9 MHz (almost no change both years). 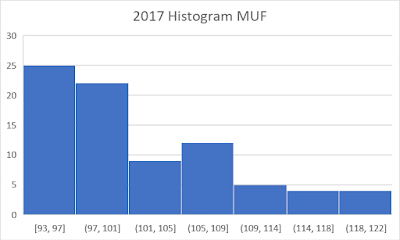 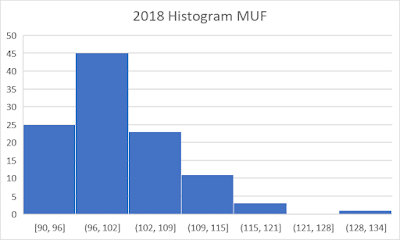 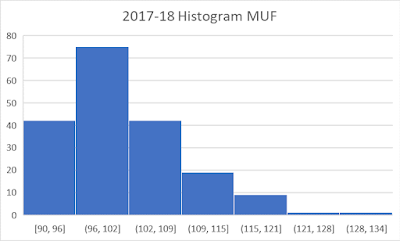 Distance and its Relationship to Maximum Useable Frequency
Since I had a fair sampling of FMBC captures, I could do a sampling of these to see if a trendline could be determined.

Indeed a Trendline was identified. The trend was the shorter the distance, the higher the MUF. In addition, after 2 years, there appeared to be what I would call a “Sweet Spot”, a cluster of distance and MUF. The “Sweet Spot” is 1,000 miles and equates to an approximate MUF of 100 MHz.
Once 900-mile distances appear, MUF increases significantly. In 2018, although a higher MUF was experienced it did not equate to a 2-Meter opening (Pacific Ocean). 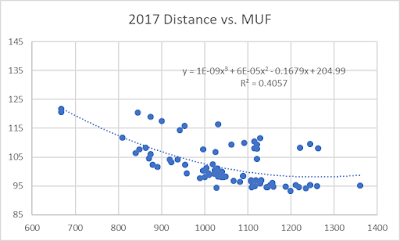 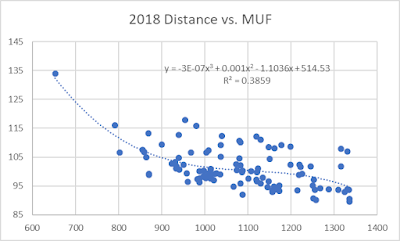 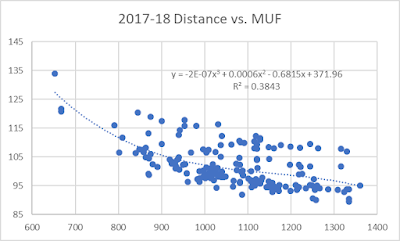 I did not experience any 2-Meter Es this season. I only heard a couple of short bursts to my east. That was unexpected and disappointing. There was only one very high MUF event that I could determine, and it was out to the Pacific Ocean.
So, after a couple of years of doing this my thoughts and conclusions to help my 2-Meter efforts are:
1.   It is all about distance. Shorter distances equate to a higher MUF. Long distances on FMBC are nice, but don’t result in Es openings on 2-Meters.
2.   Instead of moving up the band to determine a higher MUF, monitor a narrow range and observe paths becoming shorter to indicate a rising MUF. Anything less than 700 miles should be considered as an extremely high MUF.
3.   I want to develop a method to measure amplitude of an intensifying Es opening or a peaked and declining one (new project for the future...thank you BR in AZ)

It has been fun the last 3 years doing this. The investment of my $17 RTL-SDR and a $70 Log-Periodic was well worth the results in the end.
I also admit that at times doing this activity tended to draw my attention away from the Ham activities. I am a Ham first. This activity was to help supplement my pursuit of a new VUCC on 2-Meters.

I have already come up with plans to improve the operation next year. Tweaking is always a necessity. I know to do this better, I need to make improvements.

Not sure what next year holds. I always hope to share with you all the fun I have doing this.