It Might Not Be As Bad As What Has Been Predicted

Update December 2017... okay so I was a little late....not much read on this one
As I have said on this Blog, I am numbers person. Figures tell everything and trend-lines explain what has happened, what might or will happen.

Wondering what is happening.
Out of my natural curiosity, I have started plotting past solar indices in order to get an indication of what our next Solar Cycle (25) might look like.

A year ago, it was announced by a Space Weather Meteorologist, Tamitha Skov
( https://www.youtube.com/user/SpWxfx  https://twitter.com/TamithaSkov )
that the first sunspot for Cycle 25 had appeared.

Once I thought about it, I looked at the most recent Solar Flux plot of Cycle 24. It certainly appeared that it was dropping rapidly.  I thought it could be contrary to prediction that our next solar cycle would be worse than this one. 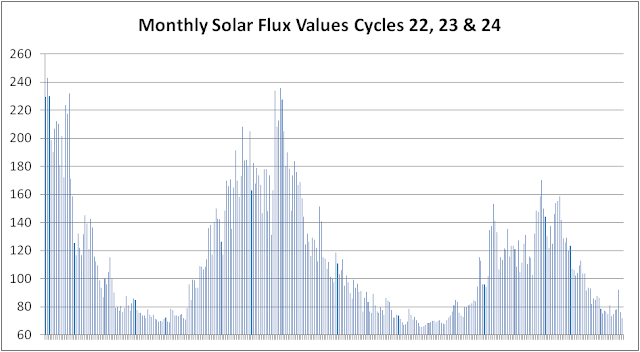 This is a plot of monthly 10.7 cm (2,800 MHz) Solar Flux since 1991 and encompasses 3 Solar Cycles. Solar Flux measurements have been done for 6 cycles and is he standard set for measuring solar activity. As you can tell by these graphs, Cycle 24 was way less active than the previous 2 cycles.


One the reasons for this less active cycle (24) was made aware to me in 2011 by Jim Kennedy, KH6/K6MIO. He shared at a VHF Conference that the reversing of the northern and southern magnetic poles were out of sync. 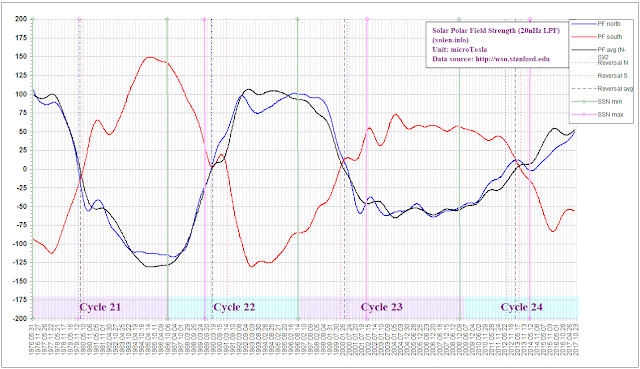 As of today, the polar fields don't appear to be out of sync as they have this cycle.

With the appearance of a new solar cycle sunspot, I thought I would look into the decline of the current one. I plotted the monthly solar flux values individually from each cycle's peak for the last 3 solar cycles. I applied "Exponential" trend-lines (lines of best fit) and assured that there was a high level correlation (perfect = 1.00). Since monthly values are erratic, the peak to valley data charted was based on the monthly "Smoothed Solar Flux" value. 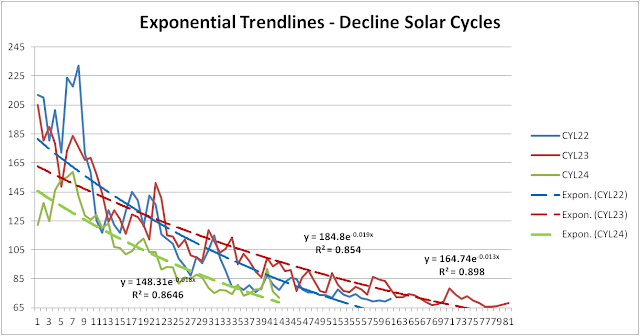 The chart shows that this Solar Cycle 24 is declining at a pace more closer to Cycle 22 than the pace of Cycle 23.  The decline of Cycle 23 foretold an extended lull between cycles and the eventual lower Solar Flux (solar activity) that followed in Cycle 24.

I have averaged out the rate for the first 42 months of decline. The decline of Cycle 23 was much slower than 22.  Cycle 24 was declining move closely to the rate of Cycle 22. In the past several months the rapid decline has slowed. Important, Cycle 24 started its decline at a much lower solar flux value. 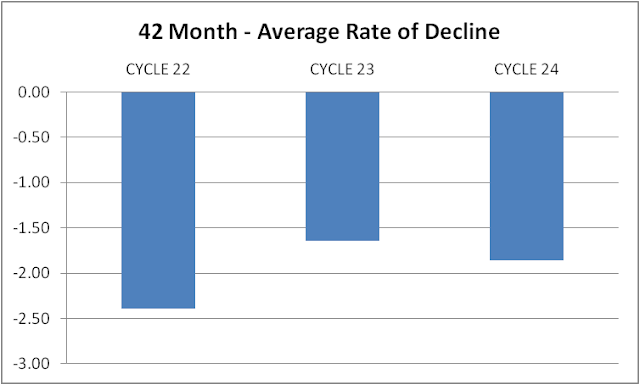 Mathematically, this is the average decline between each month once these cycles started its end.
The Mathematical term is slope. 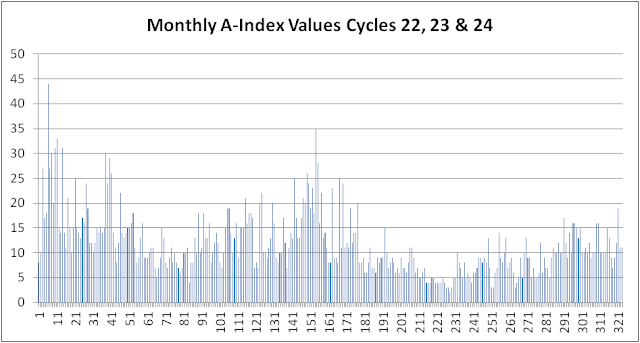 The Conclusion:
The current rate of solar activity decline equates that this solar cycle should reach bottom within 5-6 months. After my July report a short but active period slowed the rate of decline. Solar activity returned to low levels. Any lengthy spurts of activity (new sunspots) lasting several sun rotations would change the prediction. If the rapidly declining trend occurs and we hit bottom soon, it should equate to a healthy rise of solar activity for the new cycle. Once we are into a year of increasing solar activity, a more reliable prediction for Solar Cycle 25 can be made. I still do not believe it will be as bad as predicted.

A reminder, I am not a physicist.
I have looked at numbers and charts for over 40 years to identify patterns and trends.
I am an optimist. I am still not convinced the next solar cycle will a stinker.  I want to work more 6-Meter F2 before I meet my maker.... 😏 in honor of SMIRK and earn a 10-Meter DXCC on LOTW (3 Current short).

Good morning.
One of the sad things about our hobby is that we losing many of the pioneers and researchers that have made this hobby so fascinating.

I learned this morning that P.J. (Pat) Dyer, WA5IYX passed away in December 2016.
From my personal observations, Pat had dedicated his entire life to the research of VHF Propagation, especially Sporadic Es. To the best of my knowledge, he was contributing up to the last minutes of his life.

Pat's family appeared to be only VHF/UHF propagation research. His family in VHF/UHF/WeakSignal are going to miss him for a long time. 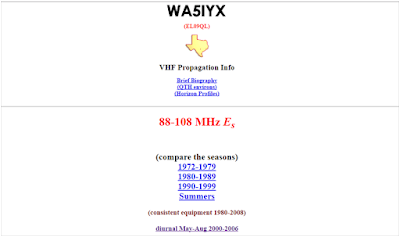 Pat should be considered the Father of Sporadic Es. He was very instrumental in identifying the "Diurnal" patterns with this propagation phenomena.
Most of my first draft Papers and Blog postings concerning multi-year observations and analyses were sent to Pat for his comment and feedback.
If anyone wants to understand Es more, you have to visit his website. He maintained some absolute meticulous records. I wish I had done the same, but getting married twice and four re-locations resulted in a loss of most of my records.

I am going to get hold of some of the VHF groups around here and see if we can't honor him by giving his last name to a VHF propagation phenomena.
RIP Pat.
73 Art Jackson KA5DWI/7 Near Prescott Arizona
Posted by K7DWI - Art at 8:57 AM 1 comment:

The Sun Was Active

2017 Begins
The Solar Cycle is spiraling down and 2 persistent Coronal Holes won't ease up.
Take that, and the Winter Solstice and you get no F2 and limited Es on 10-Meters.
So goes life. No reason to give up. Expect a Winter Es opening now and then into February.
The Spring and Summer should be fun if the Coronal Holes ease up.
Never give up. 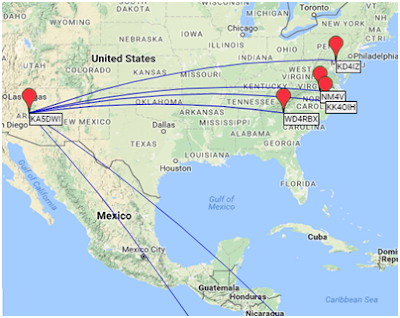