Having Fun Even If 2-Meters Won't Open

Good afternoon,
Unfortunately due to personal issues, I was unable to play in the ARRL June VHF Contest.
So I am trying to make up for lost time and play a little this weekend (June 17 & 18).

Since analog TV is a thing of the past, I am now relying om FM Broadcast DXing to determine that Es are building towards 2 Meters.
I didn't want to spend the bucks on a HD FM Receiver that had RDS capabilities, nor did I want to run out to the car that had RDS.

Last August just as the season was ending I purchased for 17 bucks a RTL-SDR. I plugged it into a WIN7 computer and one of 2 outdoor FM antennas.
This is fun !!!!!

Some screen prints of what Es openings look like.
Most of the stations are from Iowa, Nebraska and one Illinois.  Patiently wait for a build up and a RDS ID appears, or listen for the Call or local Ads. 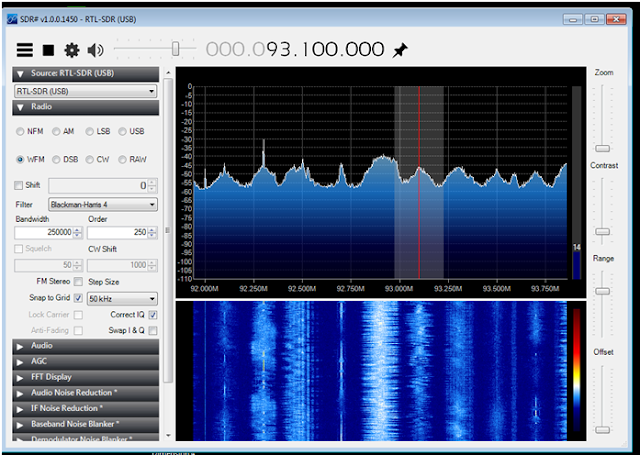 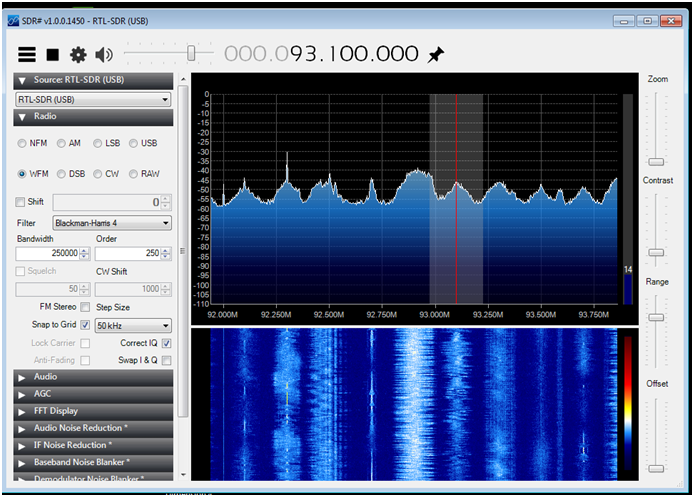 As Es build, it lights up like a Xmas Tree. 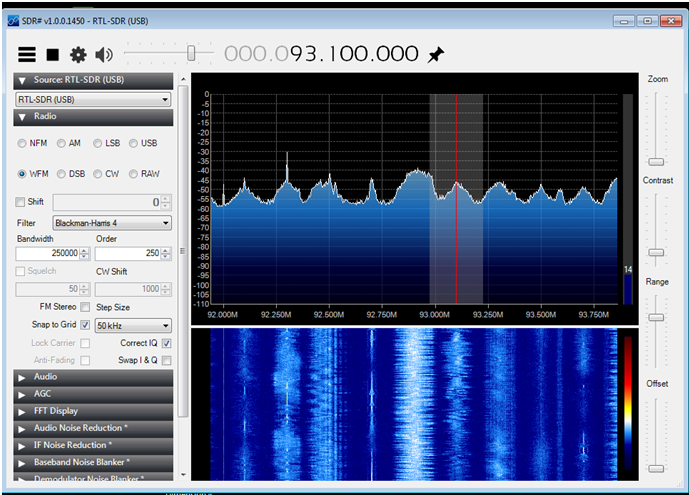 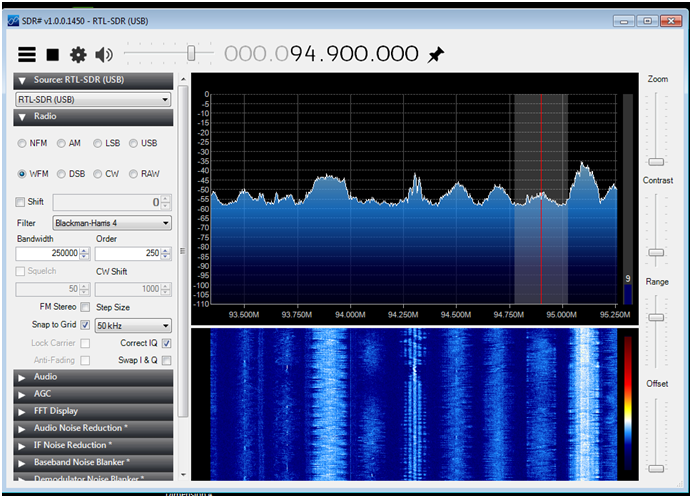 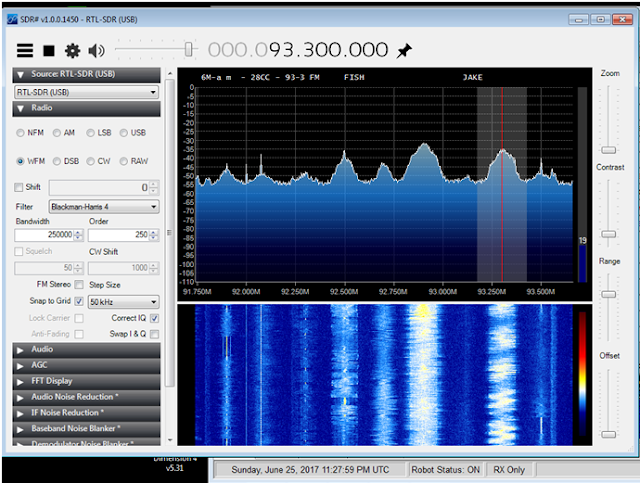 Another nice opening. Many occasions of stations battling for a frequency. It made it harder to ID, but lots of fun.

Big Day June 30:
The Independence Day Holiday is always known to be a great period for VHF Es Propagation (lots of Tropo too). Friday morning, afternoon and evening did not disappoint.
I have been having fun monitoring and working Sporadic Es from High-end HF, VHF, FM Broadcast, Old Analog TV Channels 2-7 and the 2-Meter Ham Band.
When I lived near Fort Worth, Texas, I worked on 2 Meter SSB (144 MHz), South Florida, New Hampshire, along the Canadian/U.S. border, Oregon and down to Baja California.  I have had the pleasure of experiencing many fabulous events. Friday was one of those special days. I strongly believed that it was enhanced by the arrival of a solar disturbance. Before it hit, we had some outstanding conditions. Here in Arizona, I did make a few contacts to Oregon, Washington and Oklahoma on 2-Meter SSB, but I had the best time logging FM Broadcast stations. I never had the experience doing this and it was lots of fun. 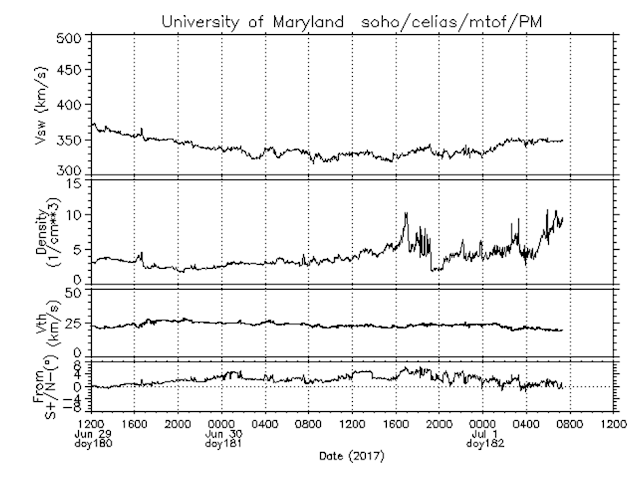 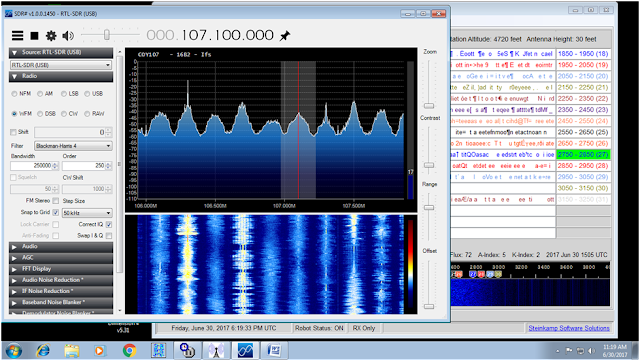 First time I had seen intense Es at the High End. 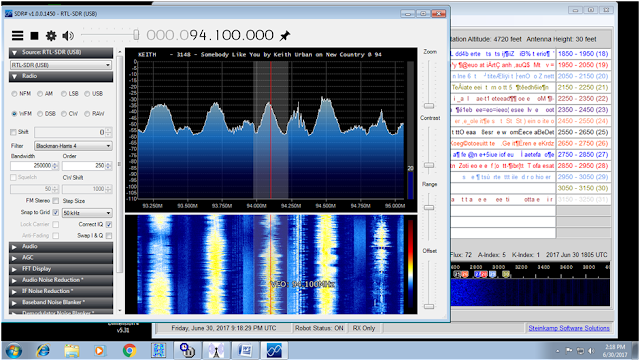 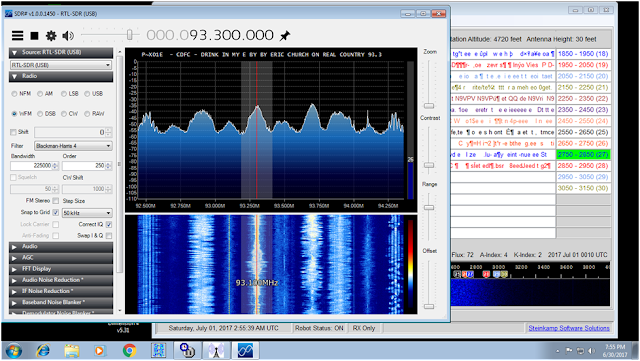 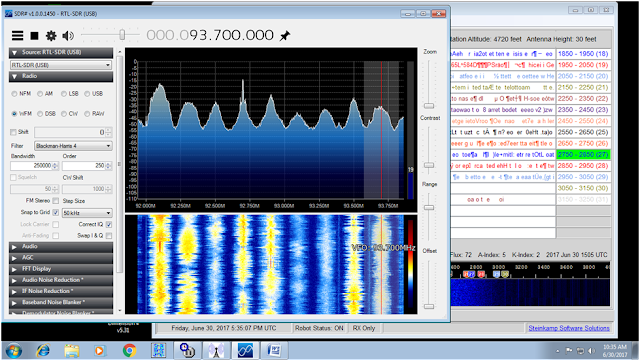 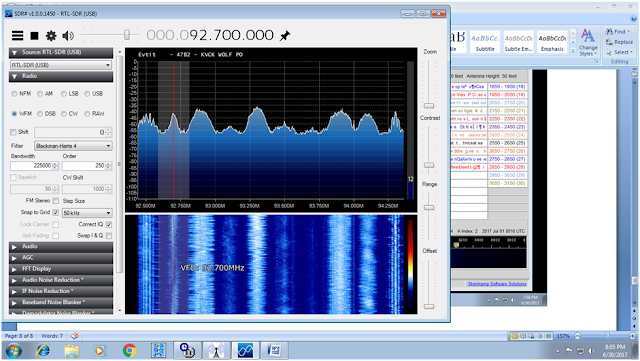 Highly intense Es.
I did work 2 Meter SSB to Washington, Oregon and Oklahoma.

The data displayed below was extracted from the PropNET database. It has been filtered to contain information pertinent to this analysis. It contains only North American participants of PropNET for the 10 Meter Ham Band on the dates noted.

Hi all,
Since last year's total Es activity was so poor, I thought I would see how this season had changed.
So far I am very pleased. There has been one noted 2 Meter opening also.
So how much different? 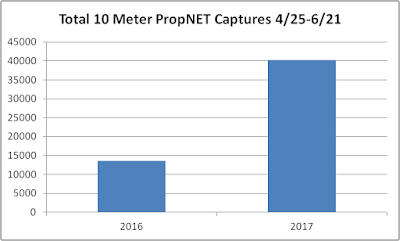 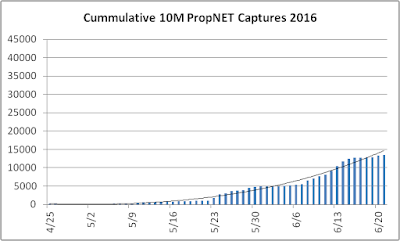 2016 had 2 occasions of extended periods of low activity. 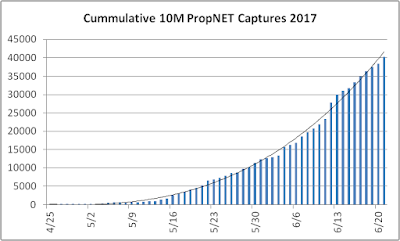 In 2017, by the first week in May the rate of  activity increase was higher each successive day. 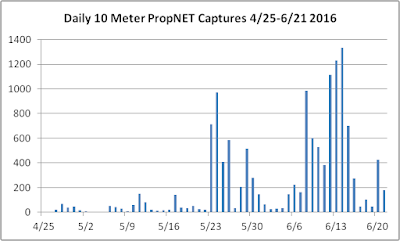 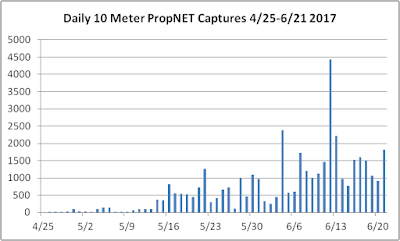 Es Season slowly progressed throughout the season in 2017.
Hourly Activity: 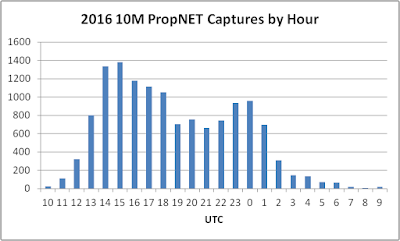 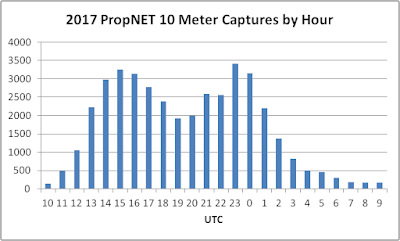 The daily hourly activity trends have changed very little between years although for 2017 high volumes and much better afternoon activity.

Everything indicates a much much better season. It is half over and we have many more great weeks to come. Stay active through mid August.
Make noise.